The true capital of Switzerland – Bern – is a small and historic city, which strongly contrasts with the large and modern Geneva. In 1983, the Old City of Bern was recognized as a UNESCO World Heritage site. Do you need more reason to give it a visit? Read on 🙂

I came to Bern on a beautiful spring day in April. The breeze and gentle sunlight illuminated my soul. I felt serene as I strolled around the Old City. I could explore the city on foot because Bern’s center is relatively small. Neither public transportation nor a map are really needed.

Indeed, whenever I come to a small city, I prefer to get lost. It sounds strange but looking at the buildings, the people, and their lives at a distance, from behind bus or tram windows isn’t the way I want or think it should be.

When you’re lost (intentionally or unintentionally), you may come across many nice things; a small lane or alley with balconies overflowing with flowers, a solitary chair overlook the Aare river, or a nice person trying to help you find your bearings (well, you are lost, remember?). All in all, in a city with many hidden picturesque corners like Bern, my sincere advice is to spend your time walking around to really take in the city’s charm.

Of course, if you are not confident walking or out-of-shape, Bern’s tramways are clean and effective. Regardless, you should check out the Marzili funicular – the shortest in Europe. It takes only a minute to ride this cute little railcar from 1885. One minute to ride but at least 10 minutes to queue! Well, cannot be helped because this tiny funicular is very famous. 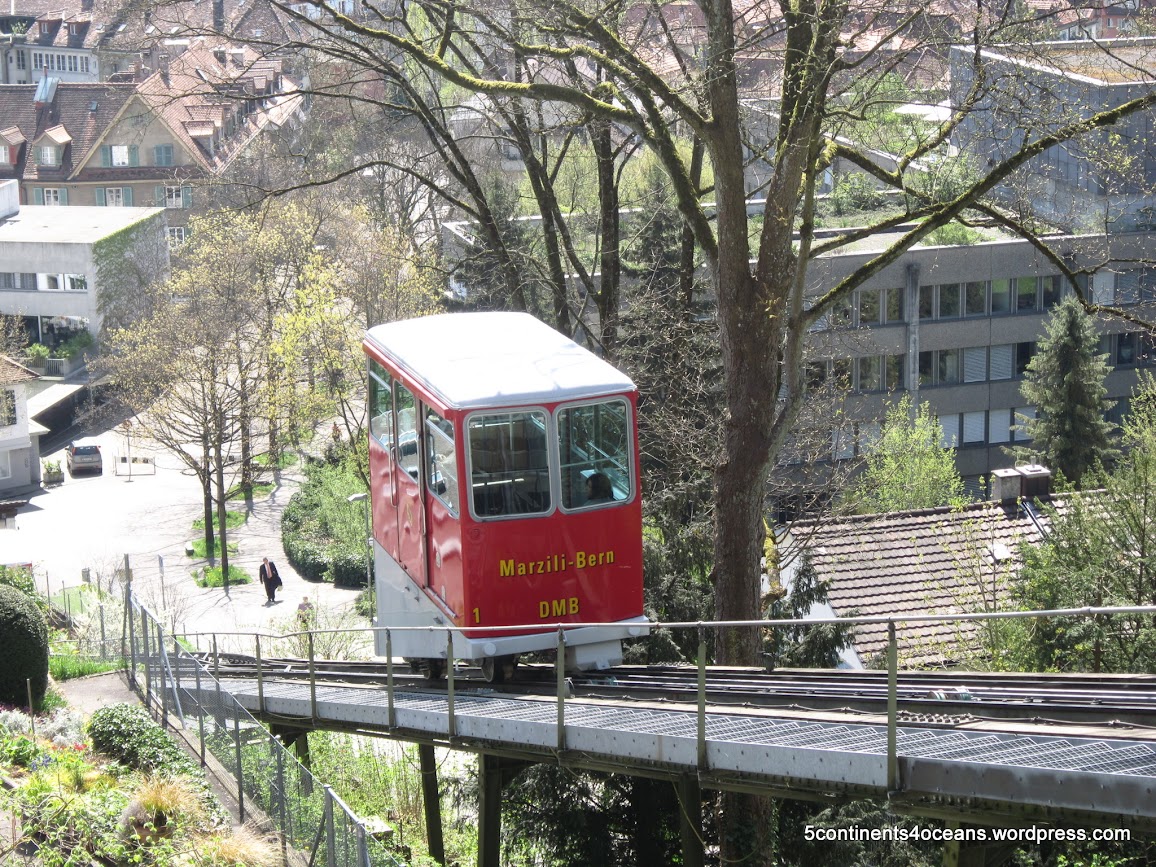 Bern’s architecture is predominantly medieval. You won’t see skyscrapers or modern buildings there. The old houses are one of Bern’s main attractions, and they’ve been very well maintained. What I liked most were the houses on the river bank. The houses themselves were beautiful but seeing them  reflected on the river was even better. 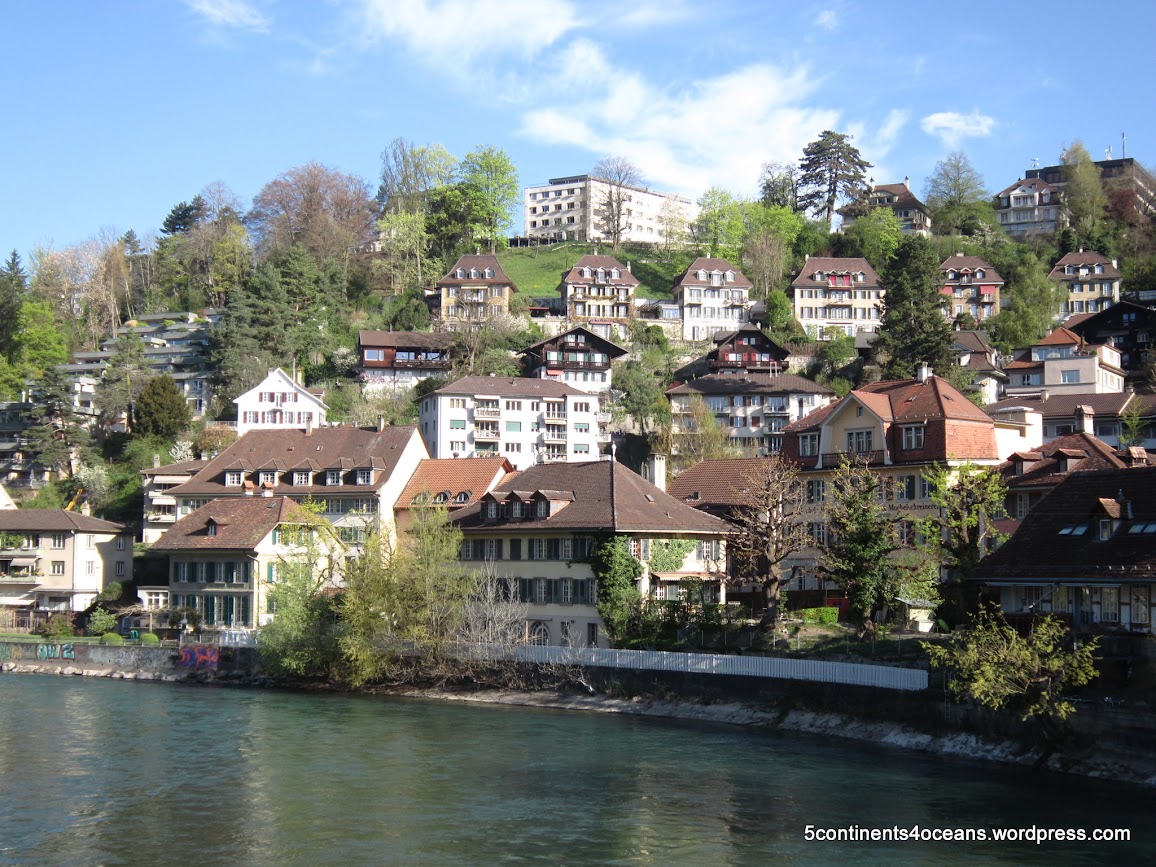 The Old City is within a bend of the river Aare. The charming combination of the river, the canals, and its bridges enhance Bern’s beauty and appeal. It reminds me of Venice and Amsterdam – the two also stand out for their dazzling canals. 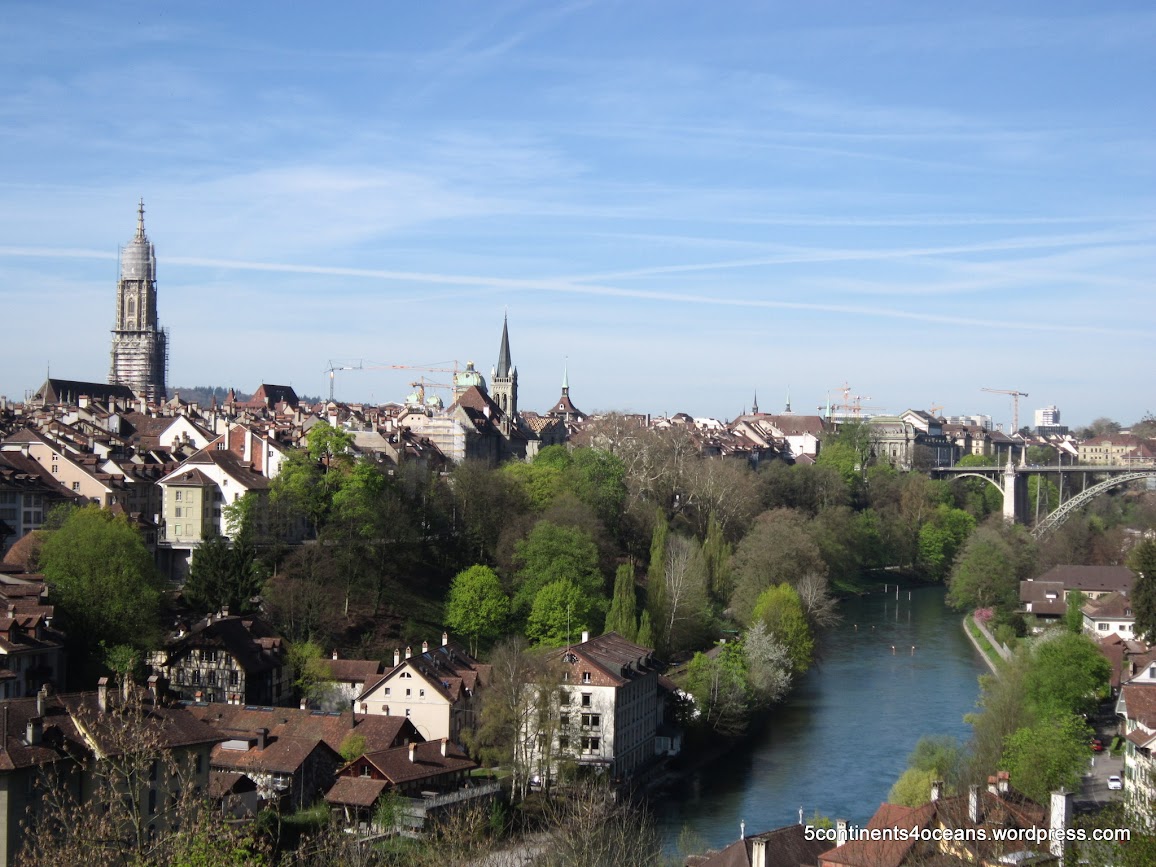 Bern and its green environment 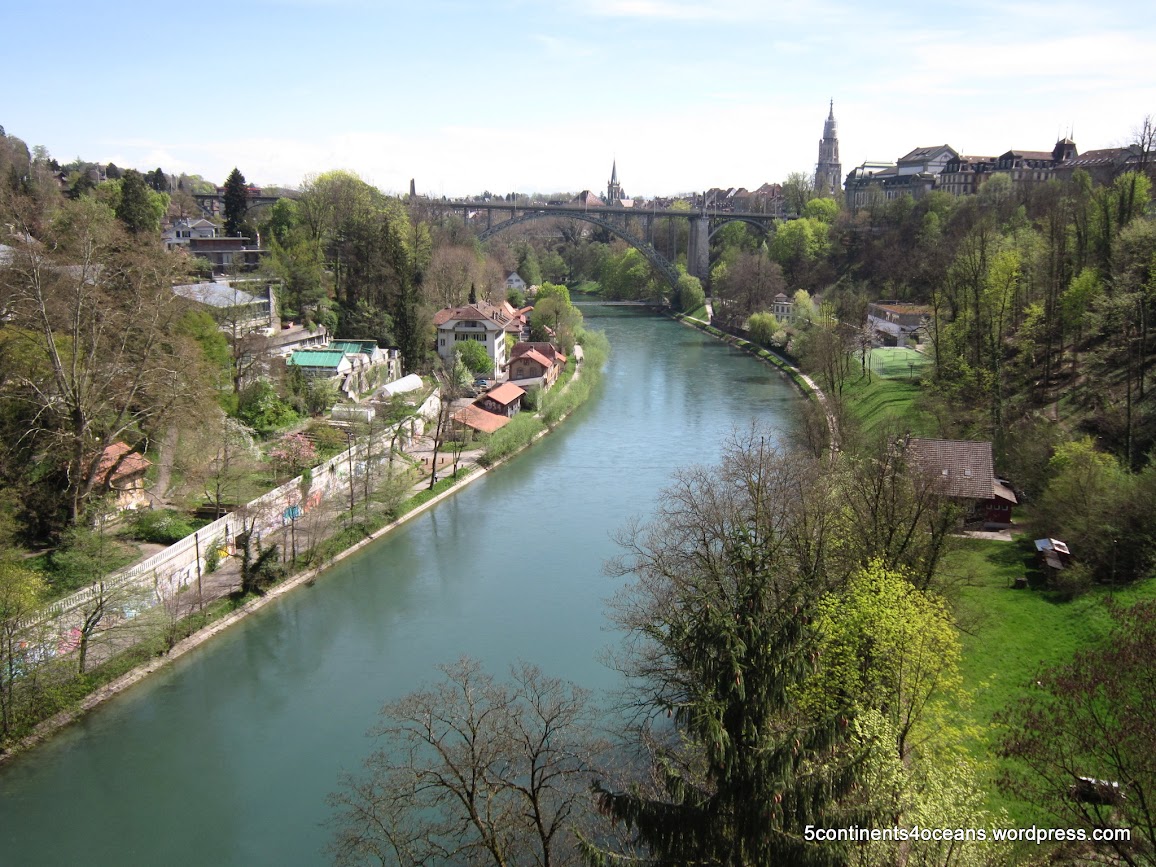 Aare river meanderings around the city of Bern

After touring the center, I crossed the river, and started my trek to the Rose Garden. This garden, built in 1913, is located on a hill so it was kind of exercise. The road up is not steep but quite long so it took me about 30 minutes to reach the garden. Because most tourists didn’t go on account of the distance, I had the whole trail for myself.

The walk was very scenic. This trail cut through the forest allowing me to walk between two columns of trees. Walk along the path enveloped by the green beauty and bird songs made me think as if I were in a romantic movie.

Upon reaching the top, blooming roses and a breathtaking view of the Bern skyline welcomed me. What an awesome reward for the effort! So I highly recommend you to pay a visit to the Rose garden where you can enjoy a panoramic view of Bern. Believe me; you won’t regret climbing up there. 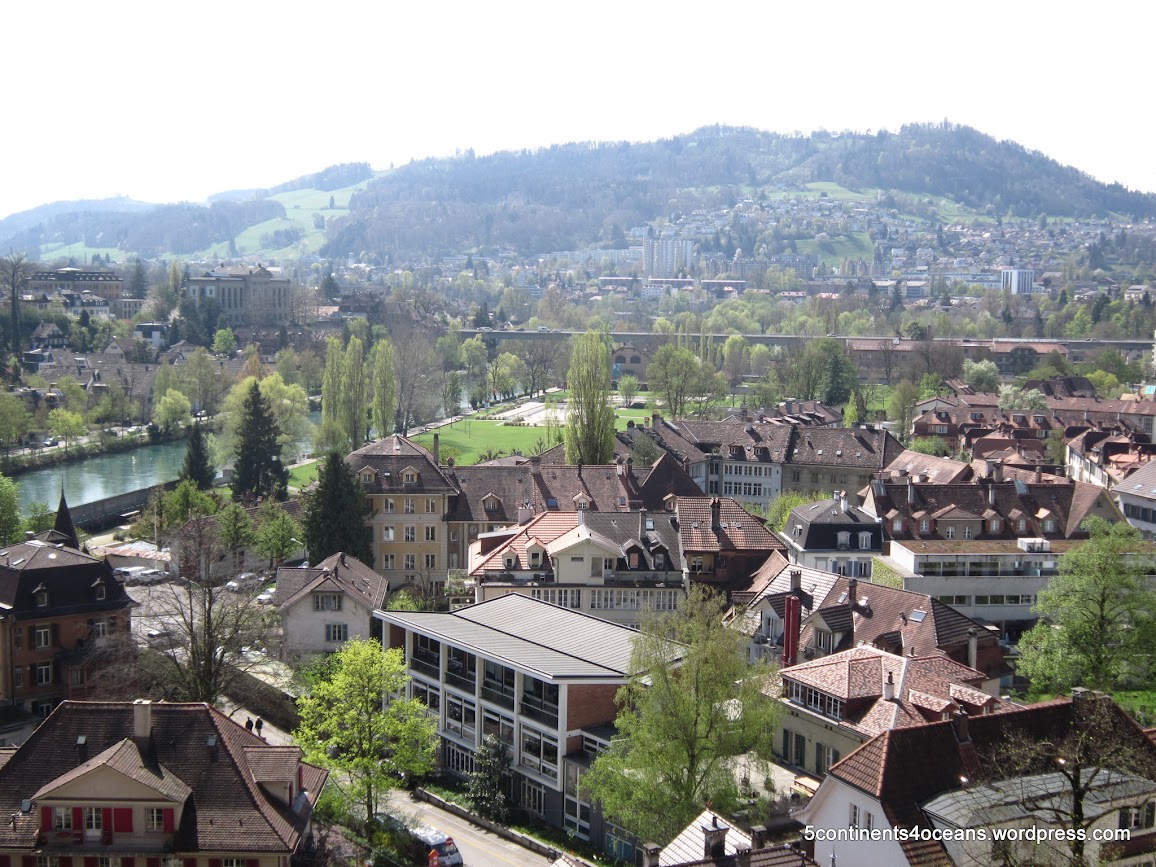 Scenic panoramic view of Bern from the Rose garden 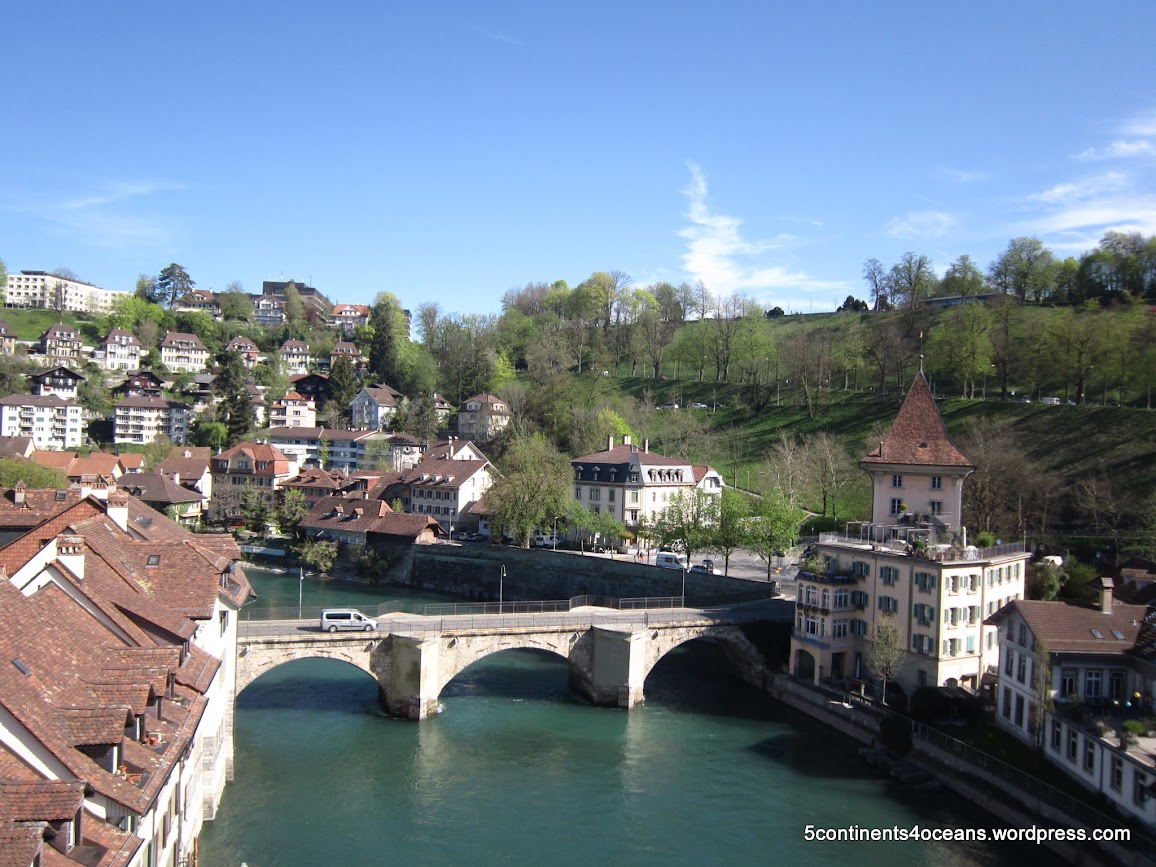 The green river, the old bridge and the medieval houses – perfect combination forms the charm of Bern

There is a café and restaurant at the Rose garden. So here is another romantic gesture: hold a cup of coffee or hot chocolate while admiring the view. It should be marvelous during sunset but I hadn’t had the chance to witness it because I had only one day in Bern with many places left to see. Anyway, for those who have more time, enjoying lunch or dinner there is also a nice option. Otherwise, just go back to the center where there are many places with nice views. For example, there is a café/restaurant that built on the Aare River. Here, instead of bird songs, you enjoy your coffee to the whisper of the Aare river. 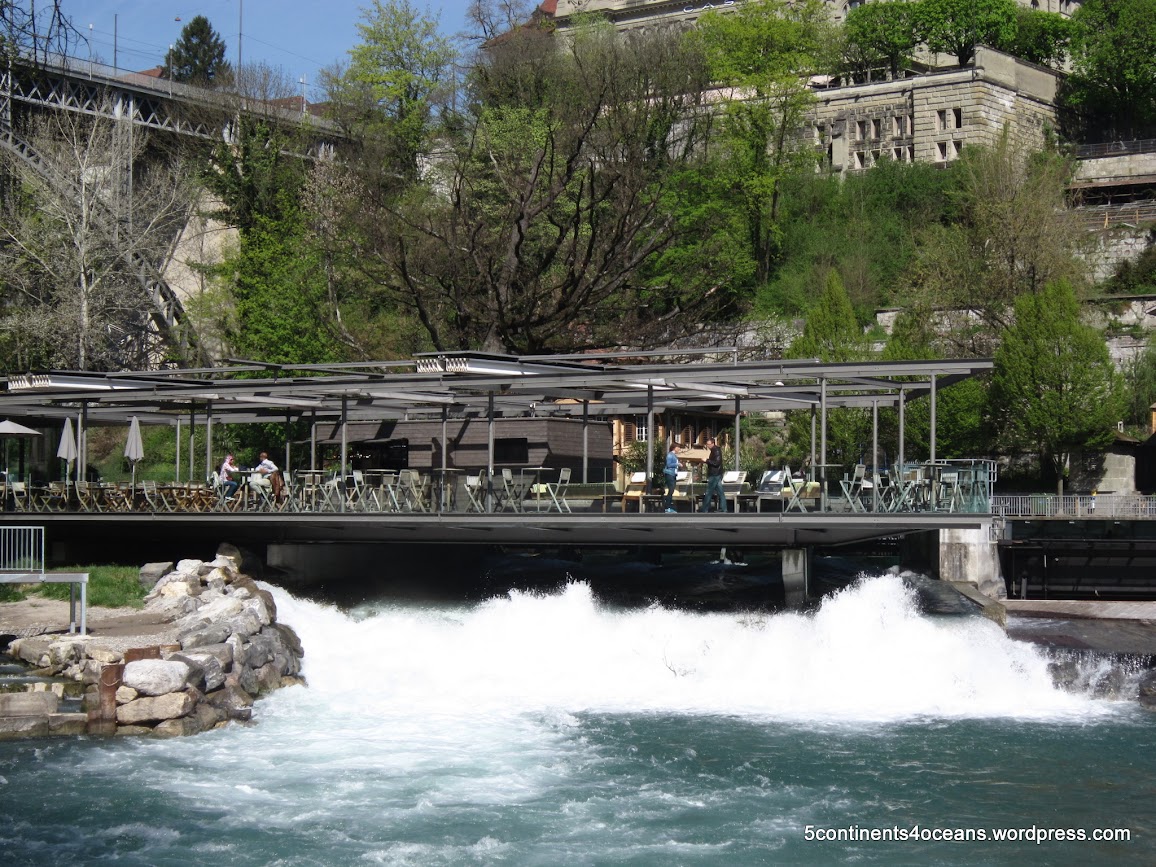 Another suggestion for a view of the skyline is from the balcony of Bern Town Hall. The town hall is right in the centre so you can save yourself the long walk to the Rose Garden. Though not high enough to capture the whole of Bern, you can still get a good look at the medieval homes on the Aare from the town hall’s balcony. When I visited the town hall, there were many people, from the street vendors selling Swiss souvenirs to tourists from all walks of life. In contrast with Asians, Europeans love the sun. They want to have tans; thus, there are always lots of people lying on the balcony to enjoy the view and basking in the sun. 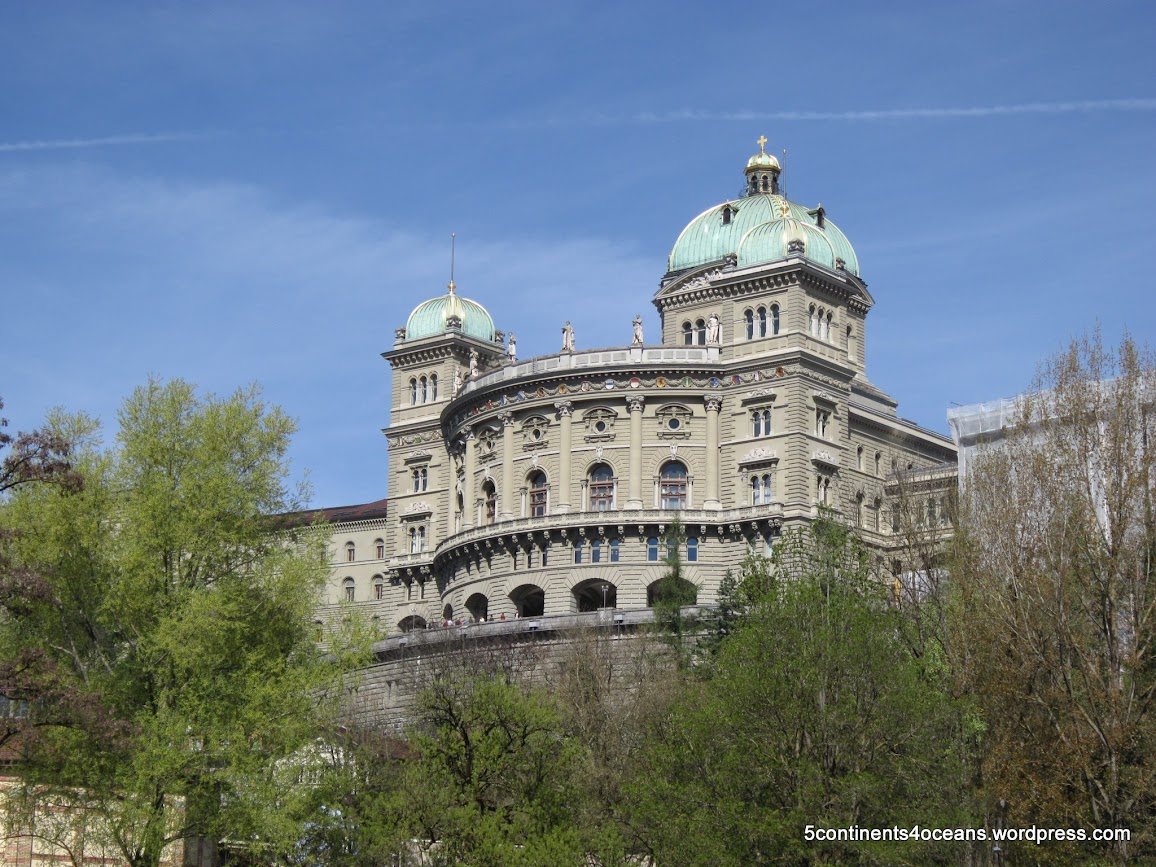 The town hall of Bern – view from the river 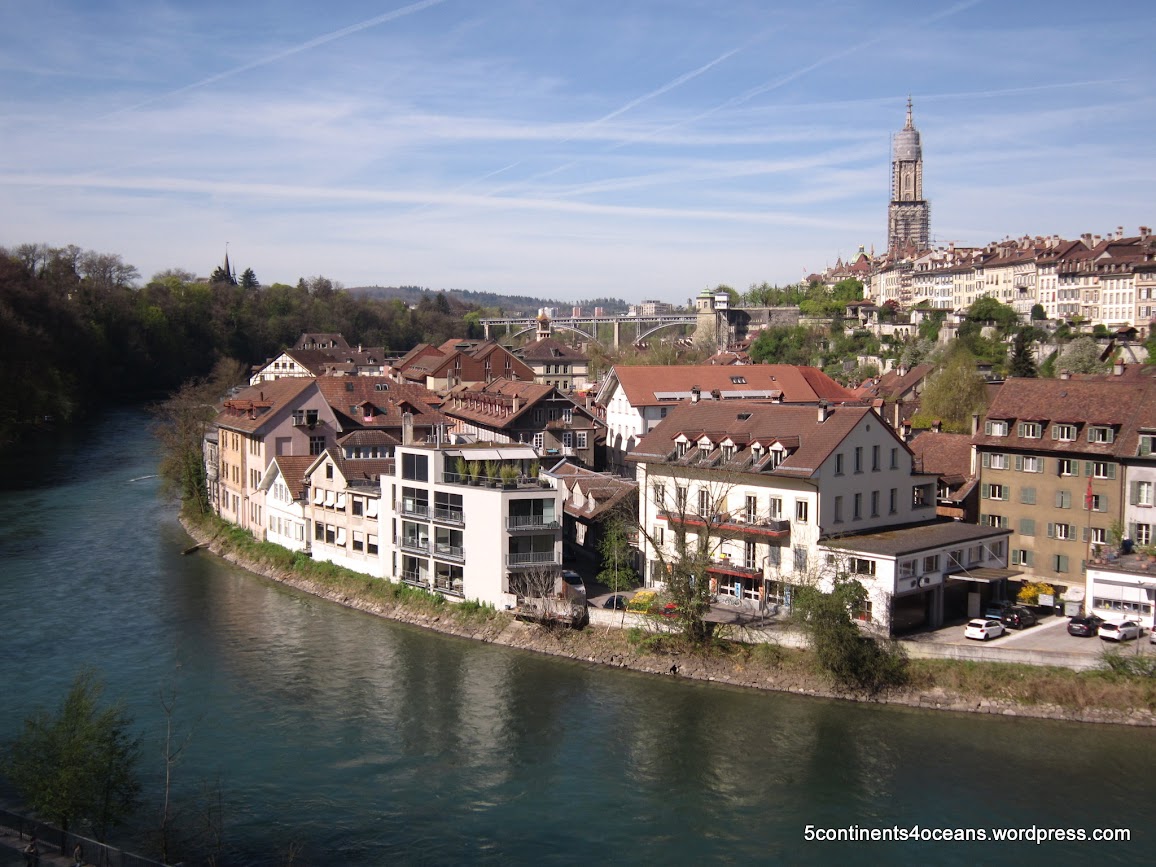 As a typical Asian, I myself prefer white skin. Instead of lying on the balcony, I bought colorful ice cream and rested in the shade. 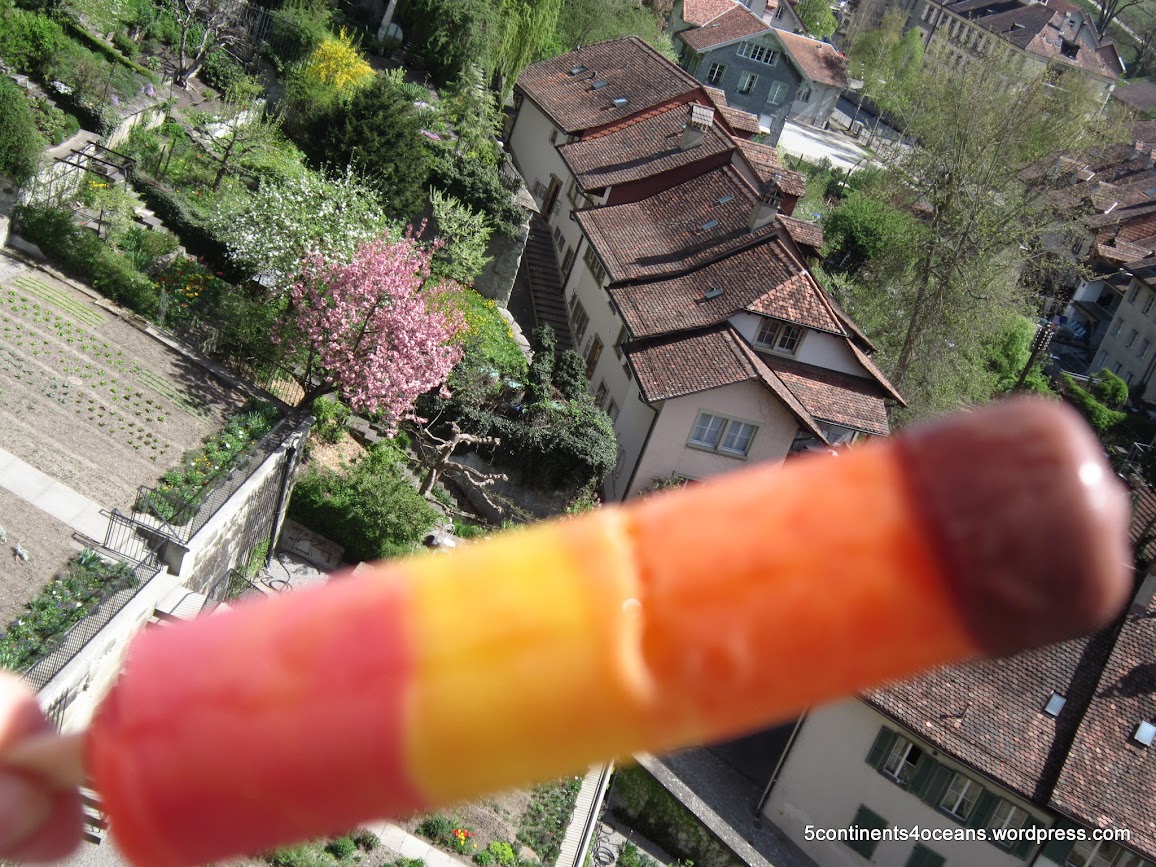 Colorful ice cream on the balcony of Bern Town Hall

After a fine ice cream break, I continued my walk around the city. I noticed as I walked around the city that I came across a chess board with huge pawns on the street. The best thing is that we are more than welcome to play. I learned to play chess professionally when I was 5 years old and though I have not followed this path, I have a special love for the game. I practice it here and there, so when I bumped into an open – welcome board in Bern, I was very eager to play a game. There are always some people nearby waiting for opponents so it was not difficult at all to find one.

Through the game I could connect with the locals. We talked about our countries of origin, the cultures, and people. After a game ( I forget whether I lost or won as doesn’t matter at all), I made friends with the same interests though not all of them can speak English. We were connected, not by any language, but by the game that we all love and enjoy so much!

In case you don’t want to play or don’t know how to, you can just watch a match and take some nice pictures. Anyway, this on-street chess board might remind you of “co nguoi” in Vietnam. Just a touch of home when you are abroad, huh! 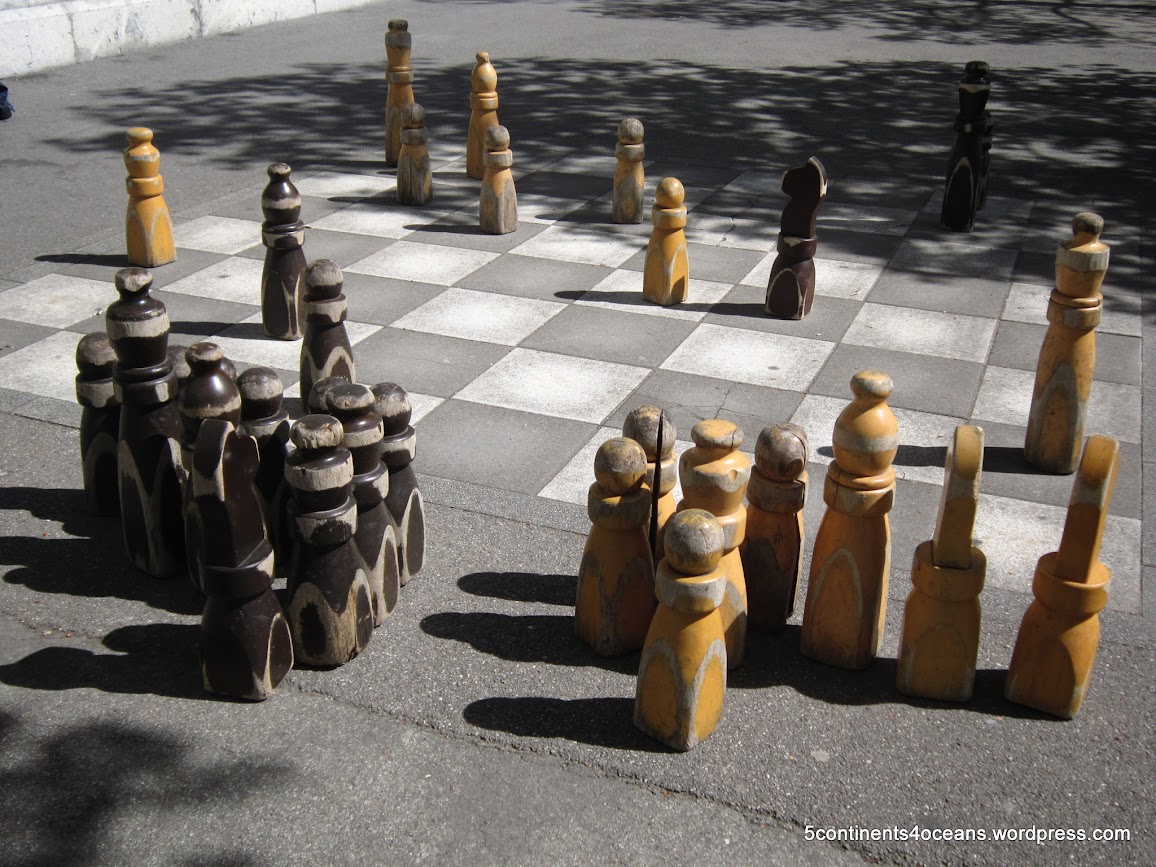 After that match, I decided to stroll along the famous shopping street, Rathausgasse – the best way to end a day. You’ll find many kinds of shops there from high-end luxury boutiques to street vendors.

Be aware that Switzerland is one of the most expensive countries in Europe and you are shopping in the capital of this country. You may spend a small fortune there if you cannot control your inner shopaholic!

Anyway, a very nice souvenir to buy is a Swiss army knife. The whole world knows about its, and it’s definitely worth every penny. One of the most famous brands for this is Victorinox. Go to their shop and don’t buy from the street vendors unless you want to end up with a Chinese knife that cannot cut a thing.

At the end of this shopping street and just few steps more is the Zytglogge Clock Tower, the pride of Bern. I chose this as my final destination for the day due to the fact that my hostel was just 5 minutes from the clock tower.

I had only 1 day in Bern, but I treasured it dearly. Every moment was filled with joy and admiration for the city’s spectacular sights. I would love to return someday. For you, I strongly endorse this city and recommend you come there. Come and adore the charms of Bern!

Time to visit: Any time!!! Yes, it is beautiful regardless of whether it is Spring, Summer, Autumn, or Winter. Bern offers a different face for each season. However, if you do not like cold weather, you may want to avoid visiting Bern in Winter. I was there in April, when the weather is most pleasant, not too cold, not too hot, and just sunny enough for nice pictures.

Language: Switzerland has 4 (yes 4) official languages namely German, Italian, English, and French though in Bern German and English are most in use.

Currency: Here is a big note: Switzerland doesn’t use the Euro (again, they are not a member of European Union). You need to change your money to Swiss Francs (CHF). 1 CHF ~ 1.03 USD ~ 0.92 Euro. Money exchange can and should be done at the airport or official counters.

How to get there: Bern has its own airport though it is quite small. Not many airlines fly to Bern (sadly) especially low-cost airlines. Alternative way is to fly to Geneva, Zurich, or Basel (cities with larger airports) and then catch a train to Bern. For example from Basel to Bern is just 1 hour and 10 minutes. To buy ticket with 50% discount, read Sự ảo diệu của tàu Thụy Sĩ: mua vé sát ngày mới rẻ ^^!

—
Have fun when roll around

All about travel in EU